TOKYO, February 16, 2016 — Casio Computer Co., Ltd. announced today that it has signed a two-year agreement as an official partner of the Formula One team Scuderia Toro Rosso, beginning in January 2016. Casio will make the most of this relationship to actively promote its EDIFICE brand, which takes its inspiration from motorsports concepts.

Scuderia Toro Rosso is enjoying a surge of popularity with its lineup of up-and-coming drivers including Max Verstappen, already a force to be reckoned with at just 18 years of age. His teammate is the talented Carlos Sainz whose father is a former World Rally Championship title holder. The two hotly anticipated drivers will lead the charge for Scuderia Toro Rosso in the upcoming Formula One season.

Under the concept of "Speed and Intelligence," the EDIFICE brand evokes a sense of velocity and energy that is found in motorsports. These watches continue to evolve in how they utilize the latest electronics technology to deliver improved chronograph and world time functions. With their bold designs and varied functions, EDIFICE watches enjoy a strong following among motorsports enthusiasts.

Scuderia Toro Rosso brings its youthful energy and racing cars powered by outstanding technology innovations to the Formula One circuit, in the passionate pursuit of speed. Casio believes that these qualities are a perfect match for the EDIFICE brand concept, which led to the decision to become an official team partner. EDIFICE will be supplying watches to the team for the 2016 season, with Casio and EDIFICE logos appearing on racing suits worn by Verstappen and Sainz. Casio and EDIFICE logos will also appear on the nose sections of the team's race cars.

Speaking about the official partner agreement, Executive Vice President Hiroshi Nakamura of Casio Computer Co., Ltd. said, “The partnership with Scuderia Toro Rosso, with its promising young drivers, will directly promote the energetic EDIFICE brand to young people.” Franz Tost, Scuderia Toro Rosso’s Team Principal, added, “We are delighted to be partnering with a brand like EDIFICE that dynamically captures the spirit of technical innovation in the pursuit of advancements. We look forward to working with EDIFICE.”

Casio will leverage the partnership with Scuderia Toro Rosso to actively promote the EDIFICE brand on a global scale. 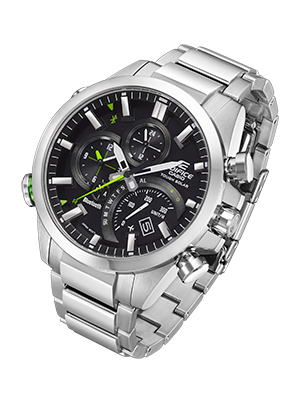